Nearly one year ago I lost my dad to cancer. I was four months pregnant with my second son and it undoubtedly changed my life forever. While it is the most devastating loss I have experienced, it has made me a more conscious and loving mother. It’s funny the things you remember about a person when they pass away. Some memories are so completely random, you wonder why you held onto it in the first place. The memories I have of my dad are so beautiful and fun and it made me think that when the day comes for my boys to reminisce about their mother, I want their memories to be just as beautiful. 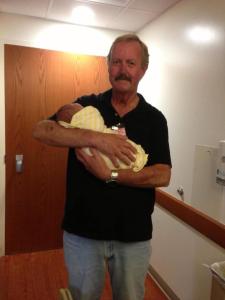 My oldest son was 2 when my dad passed away and though he did have the opportunity to meet him, he doesn’t have any memories of him like I dreamed he would. My paternal grandfather passed away when my dad was just 16. Though I never had the chance to meet him, I learned about him through stories and pictures and grew to love a man I never met. I have a spiritual connection with him and I want the same for my boys.

There are certain stories and qualities about my father that I want my boys to learn. I want them to know that even though they can’t see grandpa, he is always with them. My dad was not the kind of person to teach lessons. Instead, he would share stories about himself, his family or even his friends and it wouldn’t be until I was an adult that I saw the bigger picture of those stories. That’s what I want to share with my sons.

Be A Good Friend: The weekend before my dad passed away his childhood friend, Larry flew from New York to Florida to share one last memory with him. To see those two together was beautiful. They reminisced and laughed about old times. Without hesitation, Larry cleaned up his condo, helped him to the bathroom, and helped him remember his medications. This wasn’t because Larry felt sorry for my dad, it was because they were loyal to one another and that’s what friends do.

Be A Good Listener: This is one of those random memories that ended up being a valuable lesson. One day we were watching The Price Is Right (my dad’s favorite show) and one of the prizes was an ice cream maker. In passing I mentioned how cool it would be if we could make our own ice cream. A few months later on Christmas morning I opened up my brand new ice cream maker. I would say that the thing I miss most about having my dad here is calling him to tell him how proud I am of my babies. He would validate my concerns as a parent, and offer advice when I needed it and just as important, be a listening ear when I just needed to vent or cry.

Be Stupid: There are some stories that my dad shared with me that I won’t share with my kids until they’re quite a bit older for fear of them trying to repeat those behaviors. For example, my dad and his crazy friends used to drive their VW bus and run it into snow banks during the arctic upstate NY winters. Why that seemed like fun is beyond me but he would just light up when he talked about those crazy antics. Could they have gotten hurt? Hell yes, they could’ve. It’s a horrifically stupid idea, but sometimes being stupid makes for great memories down the road.

Be Smart: My dad was absolutely brilliant. He was a police officer and worked in traffic homicide. The math he had to do for the courses leading up to his certification was out of this world. He aced his exams but it didn’t come easy. He would study hard, get frustrated, want to give up but kept trying until he mastered it. He was so incredibly proud of himself for mastering this skill in his late 50s. I have to say, I was quite proud of him too.

Pursue What Makes YOU Happy: My husband and I made the decision a few years back to move from Florida to Tennessee. I cried and prayed over this decision and hoped that it was truly what was right for our family. I kept thinking how devastated he would be since he wouldn’t be able to visit as often. When I finally talked to him about it he told me that when he was younger he made the decision to move from New York to Florida. It was the hardest thing he ever had to do and he cried the whole drive. Ultimately it ended up being one of the best things he did and told me that he would support us 100% if we believed it was the right move for us. His support meant the world and he never once made me feel guilty for pursuing my dream.

Get to Know God: My dad struggled with depression. For years he looked at life through a dark lens. No matter the joyous things happening in his life, he had a hard time seeing past things that made him unhappy. Thankfully about 2 years ago his friend encouraged him to see a therapist and go to church. It wasn’t an overnight change, but slowly, I noticed him emerging from the darkness and he began to talk to God as if He was a close friend. I don’t want to go through any period of my life where I am unable to appreciate the beautiful gifts I’ve been given. To find peace with God is a blessing in and of itself. I wish he could have seen the beauty that was in his life all along, but I am grateful that the last years he had on this earth were filled with joy and appreciation.

I think and talk about my dad on a daily basis. Even though my boys are too young to fully grasp everything I tell them, I want my dad to be part of their lives just like he would if he were still alive. I miss him every single day. I used to look for signs that he was with me. I’d search for clues, hidden messages, etc. I was longing to feel a connection and tried to force it upon myself. But then I realized that all I had to do was be still and enjoy my children. Colton has his sense of humor, intelligence and loyalty. Jackson has his eyebrows, hairline and comforting smile. His passing, though painful and difficult, gave me the most incredible gift: the serenity to be a present and conscious parent. The patience to listen and love them for exactly who they are. The knowledge that tomorrow isn’t a guarantee and if I want my children to reminisce on their childhood like I do mine, I need to carry on where he left off.